Surprise, we are tackling a serious topic today. A serious and actually quite surprising, at least to me, topic. I just don’t believe I can spend my days only focused on Bliss when injustices are calling to be righted. Bringing light to dark corners is a precursor for everyone to have access to the delights our world has to offer.

My dear friend Kat Dean, who you may remember from her guest post  during last creativity week, mentioned today’s issue in a facebook post. I found the facts quite shocking so I asked her if she would be willing to share her thoughts with us. Prepare to be unsettled. 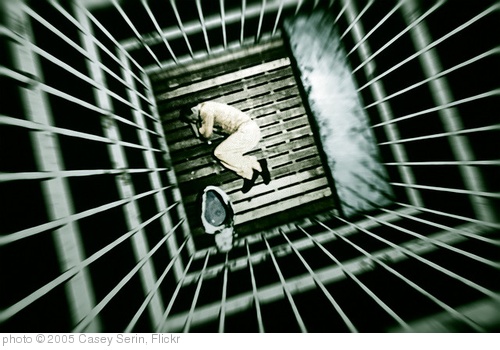 They say the road to hell is paved with good intentions. Lately I’ve begun to wonder.

On Dec. 31, 2011, Obama signed S. 1867/ HR 1540, also known as the NDAA (National Defense Authorization Act). The NDAA is a pretty standard defense budget bill with the exception of section 1021. This section is of special concern to civil rights groups like the ACLU and Amnesty International and has been decried by politicians on the left and right, as well as a slew of online bloggers.

NDAA section 1021 does not mandate (as some of its critics claim), but it does permit for the indefinite detention of a person suspected of being an enemy combatant, abroad and on American soil, without habeas corpus and without trial. These suspects can be detained throughout the duration of the “war” in question. Given the types of wars we now wage, this certainly could be very indefinite detention.

There is debate as to whether American citizens are included in this provision, but the general consensus is that we are.

When Obama signed the legislation, he indicated he would not use section 1021. But he can. And so can any president after Obama.

For many this is a sign we have reached a certain type of hell in this country. What happened to our precious, hard won, Bill of Rights? How was it discarded so carelessly as if it were nothing more than nonsense written on a used tissue? And was the road that brought us here paved on good intentions, designed to fight the popular War on Terrorism, or was it perhaps, as I’m beginning to believe, paved with our indifference? And when did this indifference begin?

Could it be as far back as Sept. 18, 2001 when then President Bush signed the AUMF (Authorization for the Use of Military Force)? NDAA codifies AUMF. Basically AUMF was used as the primary argument to justify NDAA. And all of this has been done in the name of the War on Terrorism. Should we have been making a bigger fuss back then? Should we have been fussing for the entire last decade, as the AUMF never went away.

But maybe the indifference that paved this road to hell isn’t surrounding the War on Terrorism at all. Maybe it’s another war on an inanimate noun that we neglected to pay enough attention to: The War on Drugs.

In 1970 The Comprehensive Drug Abuse Prevention and Control Act established federal drug policy as we know it.

The term “War on Drugs” is a Nixon creation. In 1971 he announced drugs as “public enemy number one in the United States.”

Since then there has been an increase in the percentage of our population incarcerated for non-violent, primarily drug-related offenses. The “three strikes laws” that popped up in 1993 in twenty-three states and the federal government played a part as well. Although “three strikes” was sold to the public as a way to target violent drug dealers, these laws can be and are used against non-violent drug offenders. The laws reduce the judge’s discretion as to how to sentence, and mandate a severe prison sentence for second and third felony convictions.

As of 2009 3.1% of the US population was under correctional supervision. That’s a higher rate than in any other country, including Russia and China. 60% of the incarcerated population were non-violent offenders. That population’s recidivism rate is 53%. With programs for rehabilitation and prison reentry programs slashed to the bone, we’ve created a system of defacto, indefinite detention for millions of Americans.

And it’s a system of indefinite detention that targets not so much the very rare foreign or domestic terrorist but rather the poor, the communities of color, the people who can’t afford a good lawyer.

Indefinite detention in this country is even older the War on Drugs. We’ve had varying forms of it for our entire history, going all the way back to the Sedition Act. The question now is, what do we do?

If you are getting rid of a serious infestation problem in your house, you don’t just treat the surface, you go deep to where the infestation originates. Maybe to de-bug newer legislation like the NDAA we need to zap its source: A general acceptance of incarceration and indefinite detention as a remedy for all infractions against the law. And then we may need to turn a very bright light on our own indifference to the plights of those we don’t quite relate to.

It’s possible that NDAA is not the disease, but is rather the symptom of a systemic chronic condition this country has never quite cured itself of.

As a side note, Barack Obama is the first president in 40 years to announce that he would cease using the term War on Drugs. His focus has been on rehabilitation and reentry programs, with the Department of Justice awarding $100 million in grants to 178 state and local reentry projects. In 2010 he signed the Fair Sentencing Act into law.

I was born in 1961 in Northern California. Spent my formative years growing up in San Francisco, in the ‘60s and ‘70s. I moved to New York City in the early ‘80s to dance, and after a number of years being completely broke in that pursuit I fell into the Music Industry, working in production for almost twenty years.

Around 2001 there was change in the industry, away from recording the bulk of a project in a large facility to recording almost the entire project in a home studio.

Since then I have been a licensed massage therapist in Texas, trained at the Boulder College of Massage therapy, I have waited tables in Washington, DC, been a poll worker and volunteered extensively with the ACLU of Texas, Amnesty International and the OSCE. I am halfway to completing my paralegal certification. After my mother’s passing six months ago, I moved back to Austin, TX. Along with my own collie, Jaz, I have her two collies as well. Everything in my life is new right now, but there is a ton of puppy love.

Wondering if you were is shocked to learn about this as I was?  It is easy for me to ignore since I am not being affected, but what if that changes or someone I know becomes detained?  Kathy

If you are new here Welcome!